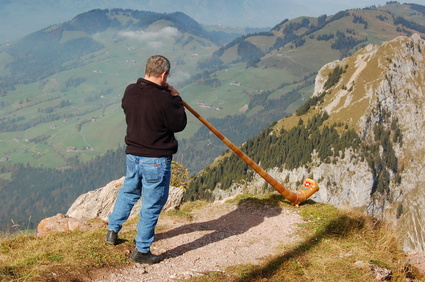 It would be a great shame to be in the Alps and not to get to know the local music. One of the most famous mountain traditions is yodelling: a singing technique that has been part of the local folk music for centuries. This predominantly male form of singing involves great and rapid changes of pitch between the low-pitch chest register and the high-pitch falsetto.

An equally renowned folk art is playing the alphorn, traditionally carved from spruce wood. It is famous for its typical deep sound and elongated, pipe-like shape. Dating back to the early sixteenth century, it was first mentioned as a curiosity belonging to an Alpine monastery. However, until the beginning of the nineteenth century, it had been almost unknown. It was the growing popularity of mountain tourism that caused its fame and widespreadness.