The capital of the Central Italian province Marche, known also as ‘town of towers’, is a historic place visited by thousands of tourist every year.

Ascoli Piceno is situated on one of the Roman roads of Salt Path. So called Via Salaria connected the Adriatic Sea with Rome. The Romans built a system of wide roads used for the import of the spoils of war, wealth, prisoners, etc.

The sophisticated system of narrow streets lends the town a maze like impression. In the very center there is an historic square called Piazza del Popolo, considered to be one of the most beautiful ones in all of Italy by the Italians themselves. The square is surrounded by Renaissance buildings and impressive Gothic palaces such as Palazzo dei Capitani del Popolo. The buildings here are built from grey marble- travertine, which were at one time mined from the surroundings areas.

An important place situated on Piazza del Popolo is the Caffe Meletti palace, which has been placed on the list of 150 historical cafes. The interior of this 19th century cafe is from floor to ceiling Art Nouveau (architect Marco Massimi). Its specialty is Anisetta, anise spirit with a coffee bean in the glass, a recipe created by Silvio Meletti.

Among other sightseeing points are San Francesco church, the historical palaces Palazzo dei Capitani del Popolo or Palazzo dell´Arengo and other interesting places. 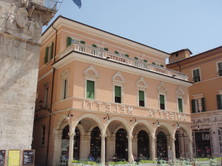 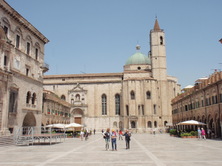